Axel (Nigel) had heart surgery for PDA as a 2 month old baby.

Axel came to SCGSR as a one day old puppy with his mom and litter.  The family was rescued from a high kill Los Angeles shelter.   Mommy Akela (now named Margot) tried so hard to care for her six puppies but was too sick and in such poor condition she couldn’t make enough milk.  They were supplemented with hand feeding, and all suffered some setbacks and scares but eventually began to thrive.  Even Axel seemed healthy.  At his first vet check up at about six weeks old, our vet Rob Tugend picked Axel up for his exam and Dr. Tugend’s face fell.  He could feel that Axel’s heart wasn’t beating properly and diagnosed him with patent ductus arteriosus (“PDA”), a congenital heart defect that gradually causes death as puppies grow and their hearts can’t pump enough blood to keep them alive.  The same condition occurs in human babies.

Unfortunately we here at SCGSR are no strangers to PDA, and we knew what we had to do.  We immediately began to raise funds for Axel’s $6000 surgery, which would give him a normal life expectancy.

Axel’s condition was confirmed by ultrasound and he was scheduled for surgery with Dr. Serdy, a heart specialist.  Axel had to wait for a month, until he was bigger and could withstand surgery.  He had his surgery on Halloween 2012, and he howled like a banshee all the way to Dr. Serdy’s office, giving his foster mom her own heart palpitations.   Despite the drama, Axel sailed through his surgery and recovered very quickly, even growing back fur faster than the average bear.

But the most wonderful part of Axel’s story is that his forever mom waited and worried and helped raise funds for his surgery throughout his ordeal, and he is a healthy, happy and well-love boy today. 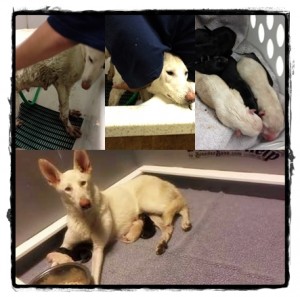 Just rescued with mom and litter. 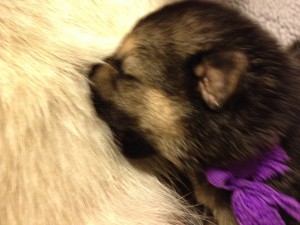 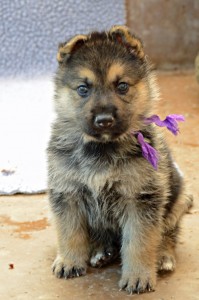 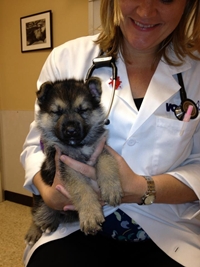 I’m getting an ultrasound! 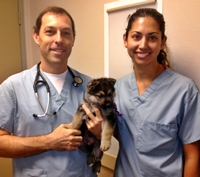 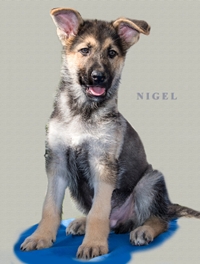 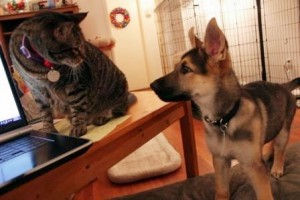 I’m adopted! What is this thing? 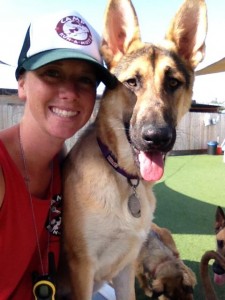 Happy at doggie day care, all grown up and healthy.

Before surgery, playing with his litter, he’s the black and tan puppy with the purple ribbon:

Just home from the hospital: